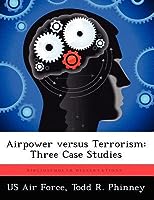 This study analyzes the effectiveness of airpower versus terrorism using three case studies. The first case study is Americas response to Libyan state-sponsored terrorism, Operation El Dorado Canyon. The second case study is Americas cruise missile response to the 1998 al Qaeda bombings of our embassies in Kenya and Tanzania, Operation Infinite Reach. The final case study is the Israeli use of airpower versus the current (second) Palestinian Intifada. Each of the case studies addresses multiple common questions: what was the context- why was airpower selected- how was airpower employed- what were the objectives and were they achieved- and finally what lessons learned emerge.

Additionally, each case study looks at the impact of military action on domestic opinion and third party opinions. Overall, these three case studies reveal a spectrum of responses with which states can respond to terrorism. Operation Infinite Reach shows that when a nation is unwilling to commit itself seriously against an enemy, the message it sends is one of timidity and inaction. Operation El Dorado Canyon was a significant airpower response that showed Qadhafi that his support of terrorism would not be without cost. Further, Libya offered multiple high-value targets that could be destroyed -- thus revealing a major weakness of states that sponsor of terrorism.

The Israeli use of air and ground power to combat terrorism has been effective, but this case also shows that military power alone cannot stop terrorism, at some point diplomacy must prevail.